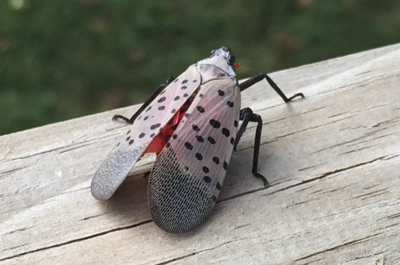 For seven years, the Spotted Lanternfly has lived in the United States, leaving death in its wake. The beautiful insect with gray wings dotted with black is native to Asia. Many reports recently with the IndyStar have noted that the insect has made its way to Indiana, where experts say to stomp them out literally.

The insect was found amongst an infestation in Switzerland County when a man called in saying he had spotted a strange-looking insect. It’s believed the Spotted Lanternfly made its way to the U.S. on shipping containers. Now spreading from state to state, railway cars are the next viable method of transportation for them.

The species is invasive and serves as a deadly hit to our plant life. While sucking on the sap of at least 70 species of plant life, it secretes a sugary substance that leads to sooty mold. The mold is a deadly fungus that will sicken the plant and possibly kill it.

At dusk and nighttime, the insects gather on the trunks of trees, most commonly the Tree of Heaven. Although the insects are quick, experts say to squash them out. If residents spot eggs, they should swipe them into a ziplock bag and dispose of them.