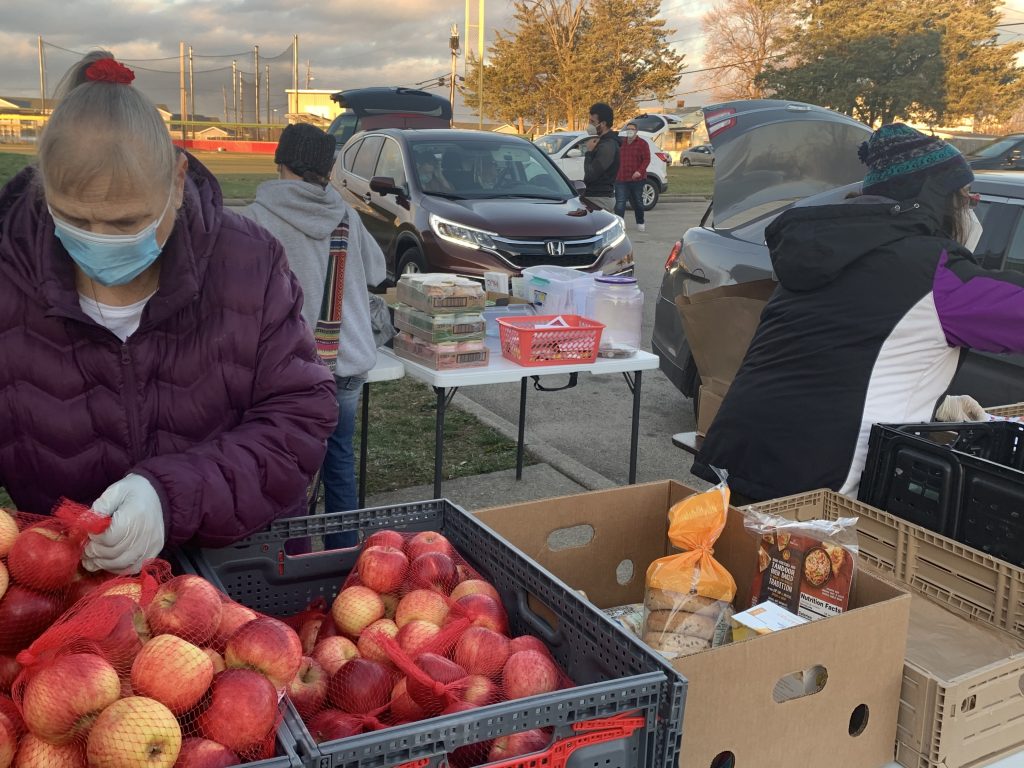 Jacqueline Hanoman approaches the first car in what looks like a miles-long line with a smile, lugging behind her a wagon filled to the brim with water bottles, protein bars and beef jerky. In the driver’s seat is a man named Leonard, who has been in line since 5 o’clock in the morning – nearly nine hours by now. Hanoman greeted him by name, handed him one of each of the items in her wagon, and struck up a conversation about how he had been since she last saw him the previous Friday. After a few minutes, the two said their goodbyes and she continued on to the next car.

This is what every Friday afternoon has looked like for some time at the Ross Community Center, though the number of families who come for food has skyrocketed since the COVID-19 pandemic began in early March.

“We give food to over 500 people each week,” said Jack McFarren, a Ross Community Center employee. “Since COVID began, we’ve had a large spike. We also get people saying it’s their first time having to come to a place like ours to get food. As the pandemic goes on, the more and more I expect this to happen.”

Those new guests aren’t alone. According to the United States Bureau of Labor Statistics, the civilian unemployment rate reached 14.7 percent in April 2020 – the highest rate since the Great Depression. Without a steady income to rely on, more and more Americans have struggled to make ends meet.

The Second Harvest truck rolls into the parking lot around 2 o’clock in the afternoon, and a few employees and volunteers help unload food off the pallets. From there, they carry boxes upon boxes of everything from produce to baked goods into the gymnasium and begin sorting the items and placing them on their designated tables. Meat and dairy products are placed on tables near the front, bakery items sit on the far tables nearest the wall, and a handful of canned goods are sorted into a bin meant specifically for elderly visitors. Hanoman asks that the produce be moved to tables just outside the gymnasium so patrons can have a say in what they want.

As preparations continue inside, one worker goes outside with a clipboard and surveys each driver, finding out how many boxes of food they would need and how many families they would be supplying. Some were only there for themselves, but others – like Leonard – came to pick up for friends and families who either couldn’t drive themselves or had other arrangements.

Each box is packed with care, as employees check to make sure that none are over – or undersaturated. Like the wagon, they’re filled nearly to the top with a wide variety of items: Sweet tea, tortellini, tortillas, crackers, almond milk and bread end up in virtually every box, with additional treats and condiments thrown in to ensure that each family gets a nice helping of food.

When the clock strikes 4 p.m., McFarren and others began lifting boxes out of the gymnasium and into trunks of cars, while Hanoman issue directions and speaks once more to each driver, again referring to them by name.

It isn’t just food that she passes out, either. On a table beside her are milk cartons stuffed with feminine products, brochures with information on how to quit smoking and start a healthy workout routine, and a handout about dangers of lead paint, which includes a number to call for a free consultation. The Ross Community Center has a large supply of individually packaged masks on hand, as well, which Hanoman gives out to guests who aren’t wearing one.

The boxes run out after sunset, and after making an executive decision to empty out the facility’s refrigerators and remaining supply of food, Hanoman’s team called it a day. Inside the gymnasium, workers take a moment to chat with each other before she enters to thank them for their hard work.

“I keep telling people every week that this is not charity,” Hanoman says. “This is friends helping friends through moments of difficulty.”

It’s one thing to hear her say it, but it’s another thing to see and truly understand it.