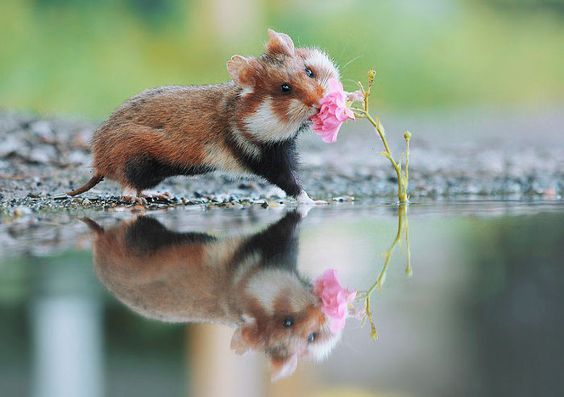 The following article is a mix of expert opinion and personal experience. Not every small animal pet will show the same characteristics, and this is merely general information.

If you’re looking to get a new family pet, whether it’s for you or your children or grandchildren, we thought it would be a great opportunity to highlight two of the more interesting options, the gerbil and hamster. Although the two appear similar, act similar, and are cared for similarly, the two animals are distinctly different and should be cared for as such.

Native to the sandy regions of the Middle East, Africa, and Asia, gerbils are regarded as rodents similar to mice. Also known as the “desert rat,” the gerbil was bred into captivity beginning in the ‘30s. There are 87 known species of gerbils, with the Mongolian gerbil being the most well-known sold in pet stores. These furballs come in a variety of colors like black, tan, white/cream and black, dark brown, and albino. They’re small in size, coming to a little over four inches depending on the species weighing approximately two ounces. Like hamsters, they dig, burrow, and throw debris with their front and back feet.

These animals are natural prey in the wild and will be skittish no matter their environment. Try to keep them in a quiet room that gets little traffic as it will provide less stress on them. Bedding, one to two hides, toys, a wheel, and a water bottle are required to maintain gerbils for the best quality of life. Gerbils should never be kept alone. Make sure to house at least two of the same gender together with two from the same litter preferred. They are naturally social creatures and will most likely perish earlier in life if left alone in a cage.

Bedding/Tank: There are various bedding options available like shredded paper, pine and cedar shavings, coconut fiber, and potting soil. Never use newspaper as the dyes and ink are toxic to gerbils. Cedar and pine hold dust which can cause severe respiratory issues for your gerbils. Potting soil is possible with careful maintenance. It’s most likely to mold quickly as it holds moisture. I’ve found the best option to be prepackaged paper bedding you would find in a pet store. At least six inches of bedding should be used to allow tunneling and natural digging for gerbils. As for the tank and size, I’ve found aquarium tanks the best option as they are chew-proof and can be used alongside a mesh lid, allowing steady airflow in the tank. The best rule of thumb is 10 gallons per gerbil, so 20 gallons for two gerbils.

Wheel: Gerbils need to exercise, and it’s likely these pets will be kept in a bedroom or back room of the house. Gerbils need to have solid wheels with no individual rungs or holes. This is something different from hamsters as they have no tails to worry about. Gerbil tails will get caught in the rungs, so make sure to find either a plastic or wooden wheel. Proper size should be considered. If your furballs are kept in your bedroom, make sure the wheels are silent spinners or other brands that advertise quiet running. You’ll thank yourself later.

Chew Toys: Gerbil’s teeth never stop growing in their short lifespan. It’s essential to have chew toys for gerbils to chew on to stay entertained and maintain their sharp teeth. Because of this, I recommend wooden toys instead of plastic as it’s a safer option. There’s no known trick to get your gerbil to stop chewing.

Hides/houses: As mentioned previously, gerbils are natural prey for many animals in the wild. They will spend their days/nights running in and out, digging under, and sleeping within their hides. The hide you choose is dependent on your likeness of the design. I recommend a wooden option as they may try to chew their hide. This applies to hamsters too.

Food: There are various food choices for gerbils ranging from seed mixtures to pelleted food. I go with the latter three times a day. Hamster and gerbil food can be used interchangeably.

Bathing: Did you know gerbils/hamsters bathe themselves? Although the critters don’t use water to clean themselves, they use their natural habitat, sand/dust. Using a small cup or container, put a couple of inches of play sand for them. They will roll in the sand, cleaning their fur.

Round, cute, and curious, these adorable animals are an alternative to the gerbil. Their demeanor is calmer, although since they’re nocturnal, whereas gerbils are diurnal, you’ll want to place them where they won’t keep you awake at night. Hamsters are native to a variety of countries around the world, including China, Syria, Greece, and more. Also considered a desert species, they are used to arid environments with burrowing opportunities to hide from predators.

The amount of care and time putting into hamsters is relatively similar to gerbils, with some slight differences. Hamsters don’t have long tails like their counterparts; wheels with rungs will work. I would still recommend using a solid wheel regardless, but that’s up to you. Make sure to provide plenty of hiding holes, and other materials for them to explore, chew, and crawl through to keep them occupied.

As mentioned previously, hamsters/gerbils are naturally skittish, so any slight/quick movements you make around them will startle them. It will take time for both species to get used to you and develop trust. At one point, you may find yourself hand-feeding them, but allow that connection to form first. No matter the tank, they will scratch/dig at the glass or sides of the container. This is normal behavior that they develop while in captivity. Taking all this into consideration, you’ll find yourself falling in love with these friendly, gentle animals.