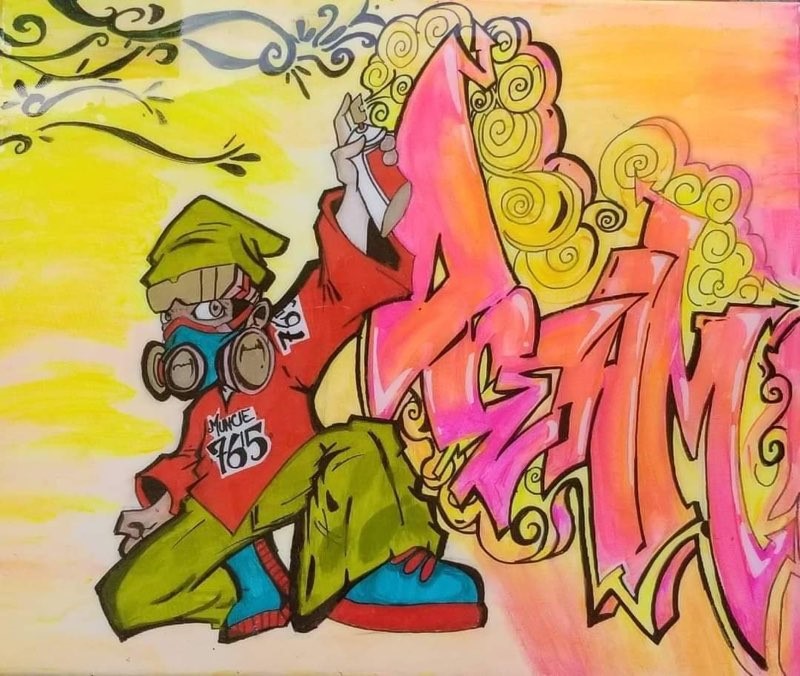 Muncie’s graffiti scene: It all started with an “S”

Drive down Muncie’s McKinley Avenue, and you’ll likely notice the eyes of two-story-tall cats staring at you from a brick wall of the Two Cats Café. Head downtown on Walnut Street, and you can’t miss the expansive “On the Mark, For the City” mural, a group of Muncie-based artists painted on Indiana’s oldest LGBTQ+ nightclub, Mark III Taproom, in honor of the Orlando Pulse Nightclub shooting victims. Ride past the Unity Bridge Underpass on Madison Street, and you’ll see a black hand holding a white hand painted on the crumbling concrete.

These are images of Muncie’s graffiti projects — lifted up as artistic expressions that build community and unity.

But art and words mark the underpasses along the Cardinal Greenway; however, residents view these images far differently than the city’s celebrated and iconic wall and mural art. The difference — the Greenway is lined with graffiti — an unsolicited trade compared to wall art and mural art, both of which are legal.

JoAnna Darda, a local artist, said the graffiti is not meant for social or community unity but rather an individual self-expression approach, often in meaning to other graffiti artists and rival gangs. Murals commonly use the wall or surrounding environment incorporated into the art itself, while graffiti is painted on anything and everything the spray paint will stick to.

Darda, also a member of the We’re Trying Collective, which painted the downtown mural, said it’s the city’s responsibility to paint over art and images that do not advance a social or community movement. The best way to rid a surface of unwanted graffiti, she said, is to simply paint over it.

“I would say Muncie has less graffiti than other cities I have visited,” says Darda. “I’ve lived in Muncie about six or seven years, and have not really noticed an increase or decrease in graffiti during that time.”

According to Arizona State University’s Center for Problem-Oriented Policing, an estimated $12 billion a year is spent cleaning up graffiti in the United States.

Most graffiti-related crimes come with either a fine, community service, probation, or a jail sentence depending on the specific circumstance and evoking message from the graffiti.

Leon Crosby, a local artist in Muncie, instructs graffiti classes at Cornerstone Center for the Arts, says graffiti artists treat walls like a canvas. He says graffiti, like any art, is subjective and the difference between wall art and graffiti is “in the eyes of the beholder.”  “Graffiti communities, for me personally, seem to be a little bit different from other art communities because they’re very encouraging and helpful,” says Crosby.

Crosby has been instructing about graffiti for six years and has worked on local projects for surrounding communities like the Paint the Park event in the Whitely Community’s McCulloch Park. He painted two murals along with his students for Ball State’s basketball team in Worthen Arena. Both murals are 10 foot by 10 foot, with one featuring five players touching a shared basketball alongside kids, symbolizing a sense of community and inclusiveness.

He said some graffiti artists use paintbrushes, while others use the traditional spray-can technique. The origin of the spray-can technique remains debatable by many in the graffiti community; however, Crosby believes it came from the Midwest. A clear coat of spray paint will ensure outside artwork will maintain its longevity as long as possible against the weather. He recalls growing up, graffiti was known only in the big cities like Chicago, Detroit and New York City, but now it is more inclusive, and the styles have changed. Crosby said the culture has evolved from one focused on hip-hop culture to one that is associated with any race and gender.

“Most graffiti artists go into more ‘legal’ work, typically after they have been detained for their time painting walls without permission,” said Crosby.

Muncie resident Aaron Roberts has been active in the graffiti culture for more than 20 years. The co-owner of Black Sword Alliance, a tattoo artist, said he has produced “too many projects to count.”

“I remember when I was seven or eight years old getting in trouble as a kid for writing on my grandmother’s walls,” said Roberts.

He agrees that the once underground community has evolved and emerged. Social media, Roberts says, has changed the graffiti community as it helps with self-promotion, monetary exploitation and overall popularity.

“Graffiti is a part of who I am,” said Roberts. “Some of us are just wired that way.”

Connecting history to the present

The first graffiti artist can be traced back to the ‘60s when a young Darryl McCray began “tagging”- leaving your artist name behind with your artwork – parts of Philadelphia with his nickname attached to his artwork by the name of “Cornbread.” It was only afterward when the graffiti movement began to arise, bringing some familiar techniques we all may know of from our childhood.

The “Cool S,” which became popular back in the ’70s, made its way to the graffiti community and even many of us who claim we’ve never done graffiti.

“Have you created that bubble letter ‘S’ before?” asked Crosby. “For the longest time, nobody knew what the “Cool S” stood for or meant, and the design continues to baffle artists today other than the fact that it’s ‘cool.’

“But almost all of us have drawn that ‘S’ before, so in a way, we’ve all practiced graffiti,” he added.

If you wish to learn more about how you can keep Muncie’s businesses and public areas cleaner, visit Muncie-Delaware Clean and Beautiful.