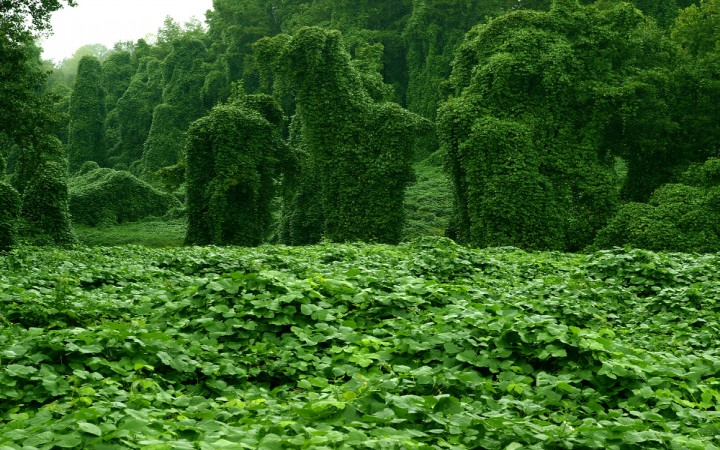 How kudzu contributes more than greenery

When it comes to America’s ozone pollution, look no further than the southern half of the United States. Dangerous greenery is snaking its way to the northern U.S., taking over anything in its path. Kudzu may serve as a sight for sore eyes, but its takeaways could destroy potentially worthwhile plant life along with the air we breathe.

Kudzu is native to Japan, but was later introduced to the U.S. in the 1930s, serving as one of the country’s largest invasive plant species. During the various dust storms that ravaged the southeastern U.S., farmers looked to the vine to battle soil erosion.

The plant consists of alternating leaves, oval-shaped and with lobed leaflets. Once it’s been planted, within three years, kudzu will produce purple or red flowers. Kudzu leaves, flowers, and roots may be eaten, but the root is recommended to be cooked beforehand.

Given the name “the vine that ate the south,” kudzu can grow a foot a day. Due to its durability in almost every soil variety, it’s guaranteed that kudzu will take over anything nearby, including light poles, sheds, even housing, if not properly taken care of. Perhaps the biggest concern is its willingness to grow over nearby plant life, suffocating it from no light source.

In 2010, the University of Virginia conducted a study, documenting the chemicals that kudzu produces. The vine produces the chemicals isoprene and nitric oxide, which, combined with air nitrogen, causes a chain reaction, releasing ozone. Ozone harms plant growth, but can cause deadly health issues for humans.

Damage occurs in the lungs, but can also produce effects on the eyes, nose, and throat. This is most dangerous for those with asthma and breathing issues. But there are various ways to combat the evergrowing vine.

Cattle grazing, mowing, herbicides, and burning of the plant can reduce and kill kudzu. Although small tests have been done with kudzu, introducing possible anti-inflammatory and medicine-like effects, not enough testing has been done to prove this.