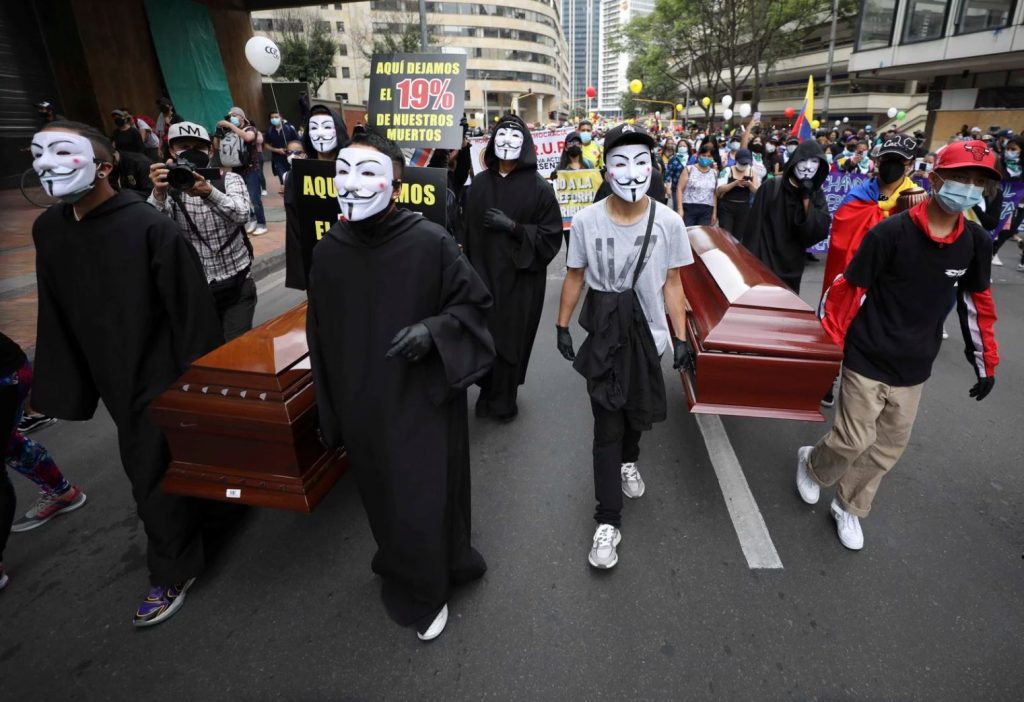 The pandemic has caused an unemployment spike in Colombia as the economy shrunk by 6.8 percent last year. To combat this and bring a “fix” to the nation’s economy, President Iván Duque proposed a tax increase for the nation. However, the plan was not well-received, to say the least, as mass protests broke out last week, leading to several deaths from skirmishes between protestors and national police.

What’s happening in Colombia is part of a larger issue of corruption and violent, tyrannical power struggles in underdeveloped countries. Over the past week, protestors have been shown wearing anonymous masks, holding up signs proclaiming justice for those unfit to pay. Protestors have consisted of shopkeepers, union leaders, teachers, university students, and retirees. Like many other countries in the region, the country is struggling with maintaining hospital vacancy while rolling out as few vaccines as possible. It was reported Thursday, April 29, that 505 people have died from COVID-19 related symptoms.

Not all Columbian officials view the protests as a positive, as bullets, tear gas, mass crowds, and overall safety have been demolished from view. Bogotá, where most of the protests have been held, has faced curfews and other restrictions as homes have been burned, and buildings were vandalized and looted. “This is a life-and-death situation,” city mayor Claudia López said in a recent article. These protests have been mounting slowly as economic policies placed by the government in 2019 causes mass anger and outrage for citizens.

The pandemic forced most unrest to subside temporarily, but as more people get vaccinated, and the government continues to call for more policies, the turmoil has come back. The tax increase would be by $6 billion, paying for emergency food handouts and other national inquiries for social rest during the pandemic. Many protesters say the tax increase has come at the worst time since much of the nation is in poverty from unemployment increases.

The United Nations have called for peace while the European Union has condemned the deaths of at least 18 individuals. It was later reported on May 3 that Duque had withdrawn the tax spike, but it remains unclear what peace will come with the news.