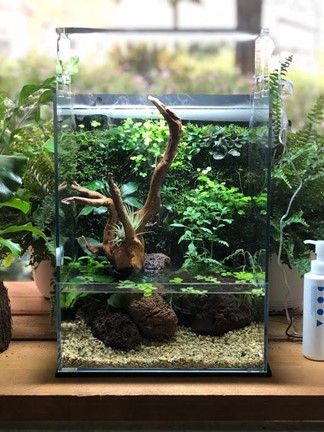 Aquascaping and its mysteries

McCune reflects on him and his wife opening Scaped Nature in 2019 in Norwich, England. McCune remembers his son being fascinated by aquariums when he would take him to pet stores.

“I never considered an aquarium. I knew they existed in the world but had never thought about setting one up myself,” said McCune.

McCune did some reading about aquascapes and later set up one. Soon there was a second tank and a third until eventually, the couple opened Nature Scaped. “I developed what hobbyists call ‘multiple tank syndrome.’”

He says there are tanks within the shop that are several years old. Not all aquascape displays are capable of lasting as long. Some landscapes McCune calls “firework displays.” “They’re going to look brilliant for a short amount of time but are short-lived. That’s in their nature.”

McCune says aquascaping is a nice distraction from life outside of the tank. He says there’s a sense of achievement and pride when aquascaping. The owner compares the feeling to someone washing their car. He also talks about the aquascaping community and how helpful they are, especially George Farmer, the best aquascaper in the U.K., according to McCune. Farmer helped the McCunes set up shop.

“I got a lot of fulfillment from aquascaping. It was a real desire. It’s funny many people come in the shop; it’s a similar process for a lot of people who get bitten by the bug,” said McCune.

Although aquascaping is relatively unknown in North America, experts share how to produce this exotic art.

Ryan Noel of Indianapolis replaced his son’s two dead goldfish with a betta named Sharkbait. Noel was curious about the environments bettas dwelled in the best and found it to be a natural environment rather than a cup most pet stores provide the fish with. He discovered George Farmer, Takashi Amano, James Findlay, The Green Machine and other well-known aquascapers, to which his journey of the hobby spurred.

He always had a love for nature and water. His design background allowed him to mimic setups he has seen in nature and create miniature worlds all his own to which he says is fulfilling. Noel says the process is more like caring for an ecosystem than caring for plants in a tank, which is different from caring for a house plant.

He says aquascaping is no different from other hobbies because you get what you put into the hobby. Noel does water changes to the tank one to two times per week and trims his plants every three to four weeks.

“Aquascaping is both a practice in delayed gratification and surprising gratification, because no matter how much you plan an aquascape and wait for it to come to maturity, sometimes nature has its own ideas. And I’ve found that the ideas the plants come up with are often quite beautiful,” says Noel.

In Washington state, Steve Waldron, the owner of Aquarium Zen, says aquascaping consists of various life, including “plants, wood, fish, shrimp” and, of course, water and light. No filter is required, unlike fish tanks. Waldron says to visit YouTube for Takashi Amano’s content, known as the “Father of Modern Aquascaping.”

“Aquascaping can be very relaxing to the mind as well as nurturing to the creative soul. An aquascape should feel like a natural habitat, so when executed properly, fish, plants, shrimps and other organisms do not even know they are in an aquarium,” Waldron said.

It wasn’t until the mid-1800s when fish aquariums became well known throughout America, according to Algone. Although aquascapes and fish aquariums are similar, the two have different setups and ways of sustaining life in the mini habitats.

Amsterdam resident Mark-Jan Fioole says his father introduced him to aquariums to which he later began collecting in his life. A couple of years ago, he moved into a studio apartment with his girlfriend in Amsterdam. His fish aquariums were too big for the space, so he bought a nanocube tank, your standard size tank. He says he fell in love with aquascaping after discovering Takashi Amano’s YouTube channel and learned his way from there.

Fioole says he loves to use moss in all his aquascapes. When he’s not using moss, he’s using red plants and a rare Borneo plant known as bucephalandra, a small shrubbery plant. All this helps Fioole remain calm with his busy job as a freelance chef, where he works long hours. “When you

come home, you still think about work, but when you sit down in front of your aquarium, that’s when you can relax and forget about the day,” said Fioole.

Research published at the U.S. National Library of Medicine, concluded that leisurely activities increase your health and well-being because of the psychological and physical requirements.

Fioole has accumulated nearly 50,000 followers on his Instagram account for over two years after posting various pictures of his aquascape collection. He says it wasn’t until he posted a picture similar to the one below that his follower count began to grow.

To maintain these beautiful environments, McCune recommends gathering the following supplies: Tweezers, scissors, filters, algae scrapers and other small tools come with any priority for attempting the art. Tanks can become overrun with algae, untamed plant life, which can lead to the possible deaths of fish in the tank.

As for maintenance, McCune says the amount of upkeep required is dependent upon the aquascape setup. He mentioned the Walstad Method. The Walstad Method, according to Aquarium Breeder, was created by ecologist Diana Walstad in her book “Ecology of the Planted Aquarium.” The method comprises a natural setting in the tank allowing plants, natural light, fish and other setups to balance each other without the need for CO2 or other maintenance tools.

To learn more about aquascaping, visit George Farmer’s YouTube channel who provides step-by-step guides to building aquascapes as well as tips and his personal experiences with the art.